Skip to content
No products in the cart.
$0.00 Cart

Menu
Menu
Contact Us
No products in the cart.
$0.00 Cart

Free shipping on all products

Free shipping
on all products

LiveU Reliable Transport™, or LRT, is the video and audio protocol developed over the last decade by LiveU. It’s not only a point to point, low latency, high resiliency protocol, but it was built to accommodate the special properties of cellular and LTE networks.

LiveU Reliable Transport™, or LRT, is the video and audio protocol developed over the last decade by LiveU. It’s not only a point-to-point, low latency, high resiliency protocol, but it was built to accommodate the special properties of cellular and LTE networks.

Most importantly, it was built from its inception to support the bonding of many connections.

LRT is the power behind all LiveU devices and software, used extensively for video transmission, contribution, and backhaul, as well as worldwide video distribution over the public internet.

PACKET ORDERING
Packet Ordering is an absolute requirement with connection bonding. LRT uses numbered packets so that the packets can be re-ordered when they arrive out of order.

ACKNOWLEDGE & RESEND
If some packets did not arrive, it informs the streaming engine to resend needed data. By acknowledging large groups of packets at a time, LRT uses less latency.

ADAPTIVE BITRATE ENCODING
As bandwidth conditions change, LRT automatically informs the video encoder to adapt the bit rate of video to keep the best possible stream within any given moment. 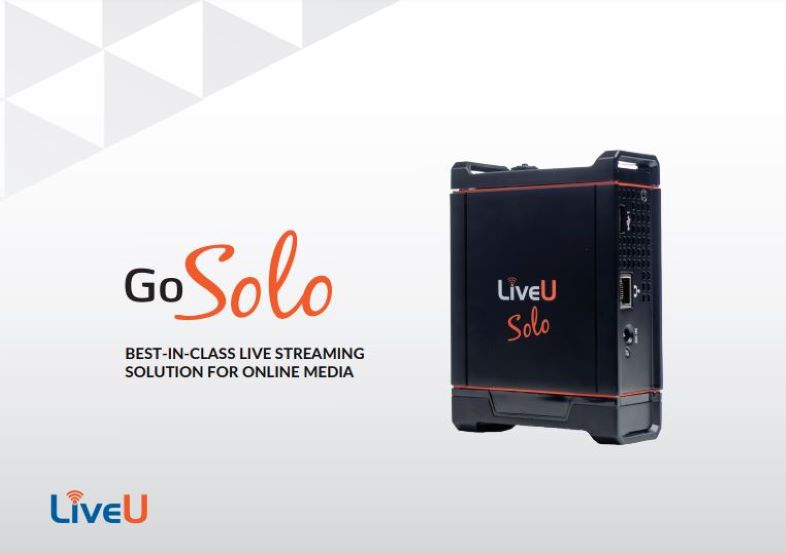 LiveU Solo is a professional-grade wireless video encoder offering
one-touch streaming to Facebook Live and YouTube, as well as other
popular social media networks and online channels. The light and
compact Solo is perfectly suited for any type of mobile use allowing you
to stream live video from anywhere.

RELIABLE – GO LIVE FROM ANYWHERE
Solo combines up to four connections (2 cellular modems, Wi-Fi and
LAN) and leverages a unique video transmission method – LRT™. This
allows you to deliver rock-solid content in practically every scenario –
on the move and in remote or crowded locations.

VERSATILE – ENRICH YOUR LIVE CONTENT
Solo can be connected to any professional camera with both SDI and
HDMI options, allowing you to live stream video in full HD, going
beyond smartphone quality. 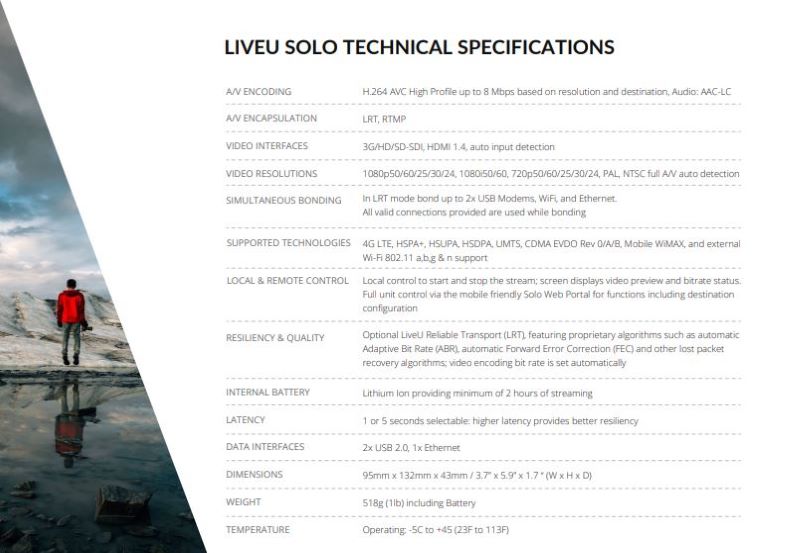 Let's Get You Broadcasting

Feel free to contact us at any time. We’re here to help.
Get Started

We use cookies on our website to give you the most relevant experience by remembering your preferences and repeat visits. By clicking “Accept All”, you consent to the use of ALL the cookies. However, you may visit "Cookie Settings" to provide a controlled consent.
Cookie SettingsAccept All
Manage consent

This website uses cookies to improve your experience while you navigate through the website. Out of these, the cookies that are categorized as necessary are stored on your browser as they are essential for the working of basic functionalities of the website. We also use third-party cookies that help us analyze and understand how you use this website. These cookies will be stored in your browser only with your consent. You also have the option to opt-out of these cookies. But opting out of some of these cookies may affect your browsing experience.
Necessary Always Enabled
Necessary cookies are absolutely essential for the website to function properly. These cookies ensure basic functionalities and security features of the website, anonymously.
Functional
Functional cookies help to perform certain functionalities like sharing the content of the website on social media platforms, collect feedbacks, and other third-party features.
Performance
Performance cookies are used to understand and analyze the key performance indexes of the website which helps in delivering a better user experience for the visitors.
Analytics
Analytical cookies are used to understand how visitors interact with the website. These cookies help provide information on metrics the number of visitors, bounce rate, traffic source, etc.
Advertisement
Advertisement cookies are used to provide visitors with relevant ads and marketing campaigns. These cookies track visitors across websites and collect information to provide customized ads.
Others
Other uncategorized cookies are those that are being analyzed and have not been classified into a category as yet.
SAVE & ACCEPT

We have custom bundles & pricing available!

Leave your details to receive individual packages and price offers.